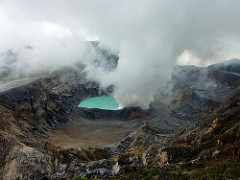 Costa Rica aims to develop a carbon neutral economy by 2021. A big part of achieving this has been the successful use the country's wealth in natural resources to develop a eco-based tourist economy. To complement this transition and to contribute toward the carbon neutrality goal, Costa Rica plans to use PMR support to achieve the following:

Costa Rica has two domestic financial instruments that could support crediting and offsetting:

Since 2007, Costa Rica has pledged to reach carbon neutrality by 2021. This commitment is incorporated into the 2011-2014 National Development Plan (NDP), the country´s highest-level statement on public policy, and the National Climate Change Strategy (NCCS), a long-term strategy for sustainable development that seeks to align the country’s low carbon growth and eco-competitiveness strategies.

Costa Rica, through the NCCS, intends to establish a Domestic Carbon Market as the primary policy tool to achieve Carbon Neutrality. It is designed to assist Costa Rica to meet its target in the most flexible and cost-effective way, while also providing a financial incentive to the private sector for investment in low emissions technology research, development,and commercialization, and to develop the country’s eco-competitive strategies.

The Ministry of Environment and Energy (MINAE) is in charge of implementing the Strategy at the national level, mainly through its Directorate of Climate Change (DCC). The DCC was mandated by Decree No. 35669-MINAET, January 6, 2010. The Decree establishes the context for policy-making within the National Climate Change Program, explicitly through the creation of new capacities and the integration of a platform for knowledge exchange in climate change mitigation and adaptation. The DCC is finalizing NCCS´s Action Plan, which is envisioned as a reference point for policy design and implementation, while strengthening education and public awareness processes.