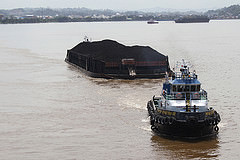 Indonesia sees market-based instruments as a cost-effective measure to reduce GHG emissions, if barriers such as high transaction costs, long and complex procedures, not attractive for small-scale economic activities, and the low demand for the voluntary carbon market are overcome. It is important to note that support of market-based instruments in Indonesia’s MRP is seen as a tool to go beyond fulfilling Indonesia’s national mitigation commitment of 26%

The activities proposed for PMR support focus on the evaluation of the existing data collection processes, especially at installation level in the target sectors, and on achieving international standards of data reliability to allow for market readiness.

The PMR MRV work is divided into two tracks: governance and installation. It will support an obligation (Presidential Regulation No. 71/2011) at the sectoral level to calculate and report emissions the energy conservation obligation (Government Regulation No. 70/2009). The results of these sectoral emissions calculation will be passed on to the Ministry of Environment and Forestry as a part of the national GHG inventory. MRV development will be managed by two ministries - Ministry of Energy and Mineral Resources (MEMR) and Ministry of Industry (MoI).

Through the PMR, Indonesia is exploring various market-based approaches to achieving its mitigation goal. The development and implementation of market instruments require a clear regulatory framework that signals the right incentives to covered entities and assign clear responsibilities to support the functioning of the market instruments. As Indonesia identifies market-based instruments to pilot, the PMR is ready to support in the development of a regulatory framework as needed.

Indonesia has been involved in Clean Development Mechanism (CDM) since 2004 as a party to the Kyoto Protocol. Since Indonesia ratified the Kyoto Protocol in 2004, Indonesia has been active in promoting the CDM and has helped to establish its requirements. In 2005, Indonesia established the National Commission on CDM (KOMNAS MPB) as the Designated National Authority (DNA) and prepared sustainability criteria to evaluate CDM projects. Every CDM project should meet the criteria that consist of environment, economic, social, and technology transfer parameters.

Indonesia has invested in capacity building activities on CDM for government officials, the private sector, academia, and other related sectors. Thanks to these efforts, Indonesia proposed a decision in the 2007 Bali Action Plan to adopt the Nationally Appropriate Mitigation Actions (NAMA), which was adopted at the Bali Conference of Parties (COP) in 2007.

As part of the CDM process, the Indonesian DNA has approved 212 projects. As of March 31, 2013, 128 projects were registered and 7,901,334 CERs were issued for 28 registered projects. Currently, 7.9 million certified emission reductions (CER) have been issued from Indonesian CDM projects.

The Joint Crediting Mechanism (JCM) between Indonesia and Japan was established August 26, 2013. The JCM incentivizes clean technology cooperation between the two countries. JCM experiences may provide knowledge and awareness to support the PMR Implementation Phase.

Indonesia is ranked among the top 20 countries in terms of global GHG emissions. Since 2009, the Government has committed to reduce emissions by 26% (or 41% with international assistance) by 2020 below the 2009 business-as-usual projections. This global commitment is now codified in a Presidential Instruction (RAN GRK), which provides the basis for development planning and budgeting. The newly created Ministry of Environment and Forestry – through the Director General for Climate Change – is responsible for climate change mitigation and adaptation policies. In addition, the government participates in several international climate finance vehicles aimed at emissions reduction, including the World Bank’s Climate Investment Funds and the Forest Carbon Partnership Facility. Since 2009 Indonesia has supported its own national fund to attract and channel climate finance called the Indonesia Climate Change Trust Fund. 85% of Indonesia’s emissions stem from land use activities. Emissions from the energy sector, mainly energy production, is the second largest source.

Indonesia's decision to focus on electricity genreation and energy-intensive industries as part of its engagement with the PMR is based on a series of selection criteria, which include: existing policies, emissions reduction potential, replicability, technology availability, investment effectiveness, stakeholder supports, issues in MRV, and market sustainability.

Indonesia enacted Law No. 6/1994 affirming its commitment to the UNFCCC and Law No. 17/2004 affirming its committed to Kyoto Protocol. In 2008, Indonesia established the National Council on Climate Change (NCCC) or Dewan Nasional Perubahan Iklim (DNPI), to specifically handle overarching issues of climate change mitigation and adaptation. DNPI was dismantled in January of 2015 and mitigation and adaptation policy became the purview of the newly formed Ministry of Environment and Forestry. In 2011, the National Action Plan on GHG Emissions Reduction (RAN-GRK), which provides a medium- and long-term national strategy to integrate economic development and GHG emission reduction was made into law. Currently, the country is working to transition to a green growth development trajectory. To do this, the government has undertaken to "green" the Master Plan for the Acceleration and Expansion of Economic Growth (MP3EI) in tandem with the forthcoming greening of of the Medium-Term Development Plan (RPJMN). These are important steps to ensure that Indonesia’s economic growth progresses along a green development pathway. The RAN-GRK is also under review as Indonesia prepares its Intended Nationally Determined Contribution (INDC) ahead of the UNFCCC Conference of Parties meeting in Paris in December 2015.

The Coordinating Ministry for Economic Affairs (CMEA) took over as focal point for PMR in May 2015. Following the inaugeration of President Joko Widodo in October 2014, a number of ministerial changes have taken place in Indonesia, impacting the action on climate change. In January 2015, the Widodo Administration dismanteled the National Council on Climate Change (Dewan Nasional Perubahan Iklim (DNPI)), which previously had handled overarching issues related to climate change and mitigation since 2008. DNPI had also been focal point for PMR. President Widodo also merged the Ministery of Forestry and the Ministry of Environment to create the new Ministry of Environment and Forestry (MoEF). The responsibilities previously covered by DNPI are now covered by MoEF under the Director General of Climate Change. These include:

In carying outPMR activities, Indonesian institutions will be mapped into: