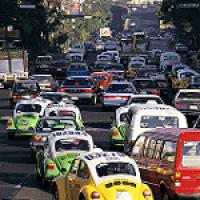 The PMR will support Mexico to:

In 2014, Mexico introduced a carbon tax applied to the use of fossil fuels. The purpose of the tax is to price Co2 emissions and to promote cleaner fuel use. CDM credits can be used to offset the tax burden. The initial price of the tax is $3.5/tCO2e. Natural gas is exempt from the tax.

Mexico envisions new market mechanisms, like crediting NAMAs, that will widen the scale of activities and participants, address entire sectors of the economy and allow the development of a series of co-benefits like the development of required national capacities.

The Government of Mexico (GoM) acknowledges that climate change constitutes the primary global environmental challenge of this century and represents an opportunity to promote sustainable human development. In response, Mexico is committed to move away from its unsustainable trend of GHG emissions growth. To support this commitment, Mexico published the General Law for Climate Change in 2012.

Mexico commits to reduce up to 30% of its emissions by 2020 compared to its baseline scenario, and 50% of its emissions in 2020 by 2050; dependent on the provision of international support and participation in external markets. In addition, the General Law for Climate Change provides a goal of increasing up to 35% of energy generated from clean sources by 2024.

Through the implementation of the first Special Program for Climate Change (PECC) between 2009 and 2012, Mexico committed public investments to implement mitigation actions, combined with complementary resources from CDM, to curb national emissions.

The definition of a new PECC 2013-2018 will enhance the scale of Mexico’s emissions reduction activity, address entire sectors of the economy and allow the development of a series of co-benefits like the development of national capacities and the promotion of large-scale NAMAs. The goal is to curb GHG and CCVC emissions towards the country’s vision for 10, 20, and 40 years as described in the National Strategy for Climate Change published in June 2013.

In 2007, Mexico published its first National Strategy for Climate Change and in 2008, the first Special Climate Change Program 2008-2012 (PECC) aimed to establish goals in mitigation and adaptation.

In June 2012, the General Climate Change Law (LGCC, 2012) was passed by the Mexican Congress. This is the first legislative mandate to transition towards a competitive, sustainable economy with low carbon emissions that generates environmental, social and economic benefits. Some of this infrastructure comprises the Mandatory Emissions Registry that is currently under development and will start operating in 2015; the voluntary carbon exchange platform launched in November 2013 and the National Climate Change Fund.

In January 2013, the Inter-Ministerial Climate Change Commission (CICC) was established to coordinate climate change policies at the federal level. In June 2013, the Government officially launched the National Climate Change Strategy (ENCC), a Mexican planning instrument to tackle climate change with a 10, 20, and 40 years vision; through three adaptation pathways, and five pathways for low emission development, supported by six policy pillars.

In October 2014, regulation supporting the National Emissions Registry, comprised of data on the GHG emissions generated by stationary and mobile sources, became effective. Reporting establishments are legally required to provide information, data, and documents regarding their direct and indirect emissions. The threshold that will trigger a reporting requirement taking into account direct and indirect emissions, will be based on an annual sum, as long as the result is equal or higher than 25,000 metric tons of CO2e. The following sectors are required to report: i) energy, ii) transportation, iii) industrial, iv) agriculture and farming, v) waste, and vi) commerce and services.

The PMR focal point is the Ministry of Enviornment and Natural Resources SEMARNAT.