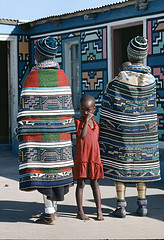 The Department of Environmental Affairs (DEA) in partnership with the South African Weather Service, the host of the South African Air Quality Information System (SAAQIS), will prepare a GHG Emissions Inventory annually. The inventory will conform to the IPCC’s 2006 or later guidelines, and will be periodically reviewed by an international team of experts. The inventory will also undertake and report analyses of emissions trends, including detailed reporting on changes in emissions intensity in the economy and a comparison of actual GHG emissions against the benchmark national GHG emission trajectory range. DEA contemplates a mandatory reporting of emissions data for entities (companies and installations) that emit more than 0.1 Mt of GHGs annually, or that consume electricity which results in more than 0.1 Mt of emissions from the electricity sector. Qualifying entities will also be obliged to report energy use by energy carrier and other data as may be prescribed.

The emissions inventory will be a web-based GHG Emission Reporting System and will form part of the National Atmospheric Emission Inventory component of the SAAQIS. It will be developed, tested and commissioned by approximately 2013.

Carbon tax which will start from January 1, 2015 should be implemented gradually and complemented by effective and efficient revenue recycling to contribute to significant emissions reductions. Carbon tax will therefore be introduced as part of a package of interventions along with the existing policies to ensure that the primary objective of GHG mitigation is achieved.

South Africa has a set of other fiscal measures to combat climate change and they will be mapped in consideration of carbon tax. For example, it has levied electricity generation tax to non-renewable electricity generation since July 1, 2009. To ensure the effective pricing of carbon and facilitate the structural change currently taking place in the energy sector, a gradual phasing down of the current electricity levy will be considered. Also, Energy Efficiency Savings (EES) Tax Incentive will be granted until January 2020. This is complementary mechanism in anticipation of the implementation of the proposed carbon tax. Some of the carbon tax revenue will be recycled through this EES Tax Incentive.

In South Africa, a number of modeling studies have been undertaken since 2005 to simulate carbon tax and assess the potential impacts of the introduction of a carbon tax instrument. Such studies were necessary to help both policy decision and specific designing of carbon tax. A computable general equilibrium (CGE) model used by University of Pretoria (2006) and the World Bank (2009), a Standard General Equilibrium (STAGE) model in long-term mitigation scenarios and a dynamic computable general equilibrium (DCGE) model all found that carbon tax will bring about a considerable reduction in carbon emissions and can bring net welfare and economic benefits when some conditions are met.

The presentation on South Africa’s experience of modeling studies on carbon tax suggests that to make modeling studies more relevant, it needs to be conducted with current or final carbon tax scheme and for an analysis to identify the optimal combination of tax revenue recycling options.

The PMR will support South Africa to:

A transparent, credible and competitive emissions trading mechanism is probably not feasible in South Africa over the medium term because:

Source: PMR Organizing Framework submitted by the government of South Africa, May 28, 2012

Sources: PMR Organizing Framework submitted by the government of South Africa, May 28, 2012; Carbon Tax Policy Paper (for public comment), May 2013

Source: PMR Organizing Framework submitted by the government of South Africa, May 28, 2012

South Africa seeks to reduce its reliance on fossil fuels and the carbon intensity of its growing economy. The country has a dual objective to make these reductions while ensuring economic growth, increased employment, and reduced poverty and inequality.

South Africa is ranked among the top 20 countries measured by absolute carbon dioxide (CO2) emissions, which accounts for 79% of total emissions. In absolute terms, total GHG emissions in 1994 and 2000 amounted to 380 and 461 million tons respectively. The energy sector emissions (i.e. electricity generation, petroleum refining) and transport accounted for more than 80% of total emissions in 2000. Agricultural and industrial sectors account for 8.4% and 7% respectively. Power Utility (Eskom) accounts for 95% of total electricity generated in the country. The main fuel is coal, which is abundantly available, accounting for more than 90% of fuel used in electricity generation.

South Africa is committed to contributing its fair share to the global GHG mitigation effort and has aspired to its emissions peaking between 2020 and 2025, remaining stable for a decade and declining in absolute terms from around 2035 as elaborated in the National Climate Change Response White Paper. In December 2009 at Copenhagen, South Africa announced it will reduce its GHG emissions by 34% by 2020 and 42% by 2025 below BAU, provided it receives the necessary finance, technology and support from the international community that will allow it to achieve this.

In 2003, the White Paper on the Renewable Energy Policy of the Republic of South Africa recognized climate change as one of the major environmental threats facing the world today.

Within the framework of the Integrated Energy Plan (IEP) released in 2003, policies should recognize the need to balance the requirements of energy supply security and low-cost, affordable and accessible energy with other imperatives, such as environmental and social development.

In 2005, the Energy Efficiency Strategy of the Republic of South Africa was published by the Department of Minerals and Energy. It recognized energy efficiency as one of the most cost-effective ways of meeting the demands of sustainable development and providing environmental benefits.

In 2007, the Energy Security Master Plan for Electricity prepared security of supply standards for the generation and transmission of electricity, and proposed several interventions for achieving the respective adequacy measures.

In 2010, the Industrial Policy Action Plan (IPAP) was designed to scale up efforts that promote long-term industrialization and industrial diversification in South Africa beyond the country’s current reliance on traditional commodities and non-tradable services. The IPAP identified renewable energy industrial development as one of the green growth potentials that should be explored.

In 2011, the Integrated Resource Plan (IRP) for Electricity was prepared aiming to ensure new electricity generation capacity for the country for the period 2010–30. The Policy-Adjusted IRP estimated a peak price of R1.12 per kilowatt-hour (kWh) in 2021. After 2028, the technology learning rates on new renewable options should lead to lower costs.

In 2011, National Climate Change Response White Paper elaborated on the government’s role in developing and implementing a suite of policy measures and strategies aimed at both mitigating and adapting to the impacts of climate change. It also recognized that a mix of economic instruments including MBIs such as carbon taxes, ETS and incentives complemented by appropriate regulatory policy measures were essential to drive and facilitating mitigation efforts and creating incentives for mitigation actions across a wide range of key economic sectors.

In 2011, the National Planning Commission (NPC) held low-carbon workshops involving a wide range of participants from government departments, the private sector, academia and civil society. The aim was to develop a pathway for the transition to a low-carbon economy as part of the country’s National Development Plan (NDP).

More news from the Department of Environmental Affairs is available here.

More documents from the Ministry of Environmental Affairs are available here.